For this comparison we come up with a few boundaries to make a selection.

These mini mobile VR headsets do not replace your high-end VR-headset but are essential for those who need or want a VR immersion anywhere anytime. I always carry one (or a few) with me for professional usage. Some of these headset are really cheap and are great give-aways.

These VR headsets come from all around the world: France, Russia, China, and the last two come from the United States.

All of them were developed with portability as the primary feature and approach the price you would pay for a Google Cardboard V2.

One thing I love about this portable headsets is the screen access.
Although they do not have a iOS compatible button, the screen touch input is possible.

Most normal VR headsets lack this feature which is very important. Another great thing is its portability.
When a VR headset fits in a front pocket it turns into a device which is broadly used and is always there when needed.

Off course this comes with a compromise: immersion quality. These headsets do not have any frame block light in the area between the smart phone and the lenses.
Another downside is that they do not have a headstrap.

If these are key feature for you than the Stimuli 2VR might be the device you would like.
2VR works like a regular set of glasses and has (adjustable) temples that make it hands-free, besides that the textile case also functions as a cover to block the light when using it. The 2VR is a bit more expensive than most others costing around the 30$ and it's not very portable. It is as portable as your sunglasses.

If you do not want to spend the cash, the Chinese headset is the one you are searching for. It's less than 5$ and it has big lenses.
The design is very simple and its made to do the job: no extra features, no luxury case or ingenious folding mechanism. Just simple good VR at the spot.
This Virtual Reality gadget does not have a proper grip which makes it hard to maintain quality immersion when in use.

Sometimes one wants to carry 5 VR headsets without anyone noticing... Homido Mini is your pick.
It's really small when folded. It has the good European quality we already know from other Homido headsets (Homido VR and Homido Grab).
The simple but refined design and folding mechanism make this a small and affordable premium headset. The lenses could by bit larger dough.

Its obvious these low prices and small sizes couldn't be achieved without compromise.
One of the most important comprises is the lack of adjustability: focal length adjustability and interpupillar display adjustability.
If you need a set of goggles that has an adjustable IPD than there is just one: Fibrum Nippers.
Fibrum Nippers has manual and independent adjustable lenses. It's the least portable and shares its appearance with the American C1  Goggles. Fibrum Nippers is not very easy to buy, being available in Russia and costing US dollars.

Last but certainly not least I Am Cardboard now sells its crowd funded Pocket 360 VR.
A very portable Virtual Reality Mobile headset which is available in various color for a very nice price and comes with a compact casing to protect the headset when it's on the move. 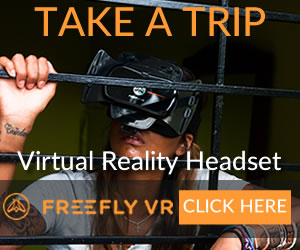 Each one has a feature in which it stands out. This could be the determining factor for one to buy a headset.

The Homido mini is by far the smallest when folded, comes with a QR-code in the instruction manual looks descent. Fibrum has adjustable IPD. For those with an IPD that is more narrow of wider than average this should be a very decisive feature. The Chinese 3D mini goggles are extremely cheap and work well with large phones like the iPhone plus models. This headset has no extra accessories and does not provide a QR-code. I found it's best to use the Fibrum Nippers QR-code. 2VR is the only one that can be used hands-free and has a cover to block light. Pocket 360 is very affordable, has a very good FOV for both the iPhone 4.7" and 5.5" models and has a small casing to protect the lenses when carrying.

Taking into consideration all divers aspects of these headsets its difficult to choose the ultimate portable headset. But we tried:

If you own a 4.7 inch iPhone the I Am Cardboard Pocket 360 VR would have my preference. Its price and the FOV were decisive. It's not the best quality headset and it's would not win any design or originality award but the largest (reasonably good quality) lenses, its price and the portable casing make this headset our preferred portable headset at the moment of writing.
If you own a large 5.5 inch iPhone model 2VR and the Chinese 3D goggles have the best Field of View. 2VR is hands free and the cover improve its immersion.

Keep in mind that FOV is very personal depending on interpupillar distance which varies from person to person.

Price are always changing. These are the price indications at the moment of writing.

Don't agree? great! please give your opinion bellow in the comments...

2VR is now available in white, black, blue and red.

Finally the good games are starting to appear in the AppStore!

Yet another 10 Virtual Reality iOS Game titles were added to the VR-iPhone Game List! And here are some FastHit VR promocodes:

VR-iPhone.com is a participant in the Amazon Services LLC Associates Program, an affiliate advertising program designed to provide a means for sites to earn advertising fees by advertising and linking to amazon.com, Amazon.ca, Amazon.de, Amazon,co.uk, Amazon.fr, Amazon.es and Amazon.it